A Game of Drones 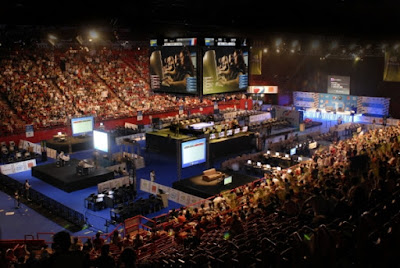 Something I've grown to like more and more over the years has been watching gaming tournaments and e-sports events. Today with MLG, EVO, and other leagues sprouting up there is more and more variety than ever before. I love checking out the latest COD and BF3 montages on YouTube. There are so many great editors and commentators out there: Boo, KYRSp33dy, Deluxe4, Wovn, and tons of others. One of my favorites is HuskyStarcraft.

I personally never played Starcraft 1, I even own the Starcraft Battle Chest and still never played it, but I love watching  H to the Usky Husky cast replays. He lends such a great personality to his casts that I always look forward to his next episode. I know the benefit of walling off your ramps to prevent enemy scouting, why taking an early natural as Protoss or Terran is risky, the power of a good Baneling bust, and the glory of a well played 2 base all in. I know all this and more without ever playing more than 1 hour of Starcraft 2. I find that this game lends itself so well to commentating, you end up realizing all the nuances of each race and the insane strategies the top players use. One of which is The Little One, LiquidTLO, TLO, or my new favorite moniker, Game of Drones.

A brilliant player with a great name. Speaking of A Song of Fire & Ice it seems I can't get together with my friends without them talking about the show Game of Thrones. Apparently its a big deal. I've only just started watching it and after the first episode I was hooked. Until recently I've been stuck on Season 1, Episode 3, but now I'm able to finally finish Season 1. Wow, this show is good, like unbelievably good. This post has taken more than an hour to write because I've had the show playing alongside my web browser and was constantly distracted by some violent act, amazing story telling, or simply Dinklage showing up on screen. If you haven't been watching, go get the DVDs this weekend and marathon that shit.

Warning: This podcast may contain swearing and/or drinking. In fact, we pretty much guarantee it does.