Getting Lost in New Vegas...Again - Pt.1

While Ivy Mike is happily clicking away in Diablo 3 and gathering the sweetest of loots, I am revisiting one of my favorite console games. I started to get into a Fallout mood after watching the amazing NukaBreak webseries, again, for the 3rd time. They also have a Kickstarter for Season 2, which I'm very excited about. So I powered up my 360 and drifted into the wasteland all over again.


I found an old lvl 2 character I had saved, aside from my original level 30, so I loaded that and discovered this game mode was set to Hardcore where you have to manage your Hydration, Food, and Sleep levels in addition to Health and Radiation. Challenge accepted! As of this moment I have about 29hrs into the game and I am completely enthralled with Fallout all over again. 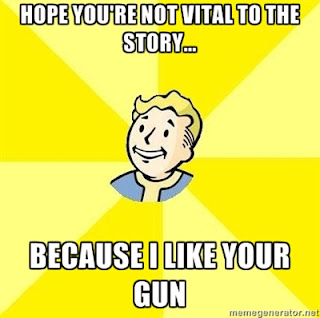 In the Fallout universe since so many of the enemies are male, playing a female character can get you an easy edge by choosing the Black Widow perk, which gives you +10% extra damage to the opposite sex and special dialogue options. Trust me, in Hardcore Mode, every little bit helps. Even with Strong Back, which lets you carry +50lbs more, you still can't hold that much as much since food, water, and bullets have weight so you can't just walk around with thousands of rounds of every ammo type. You need to make more distinct choices about how to survive, what 3-4 guns to carry, and how much armor to wear. I've also taken to playing the game with all music turned off so I simply wander the world listening to the growl of nearby monsters, the war cry of marauding bandits, the howl of the wind and my footsteps taking me further into the wasteland. The lack of music creates a very surreal experience of loneliness and accentuates every encounter more than my previous playthroughs.

﻿A few hours in I experienced my first mission breaking glitch. During the quest "Beyond the Beef" you must rescue Ted, a kidnapped son of a cattle rancher, from the White Glove Society, who run a casino in New Vegas, with the not so veiled threat that Ted is in danger of being cooked and eaten by the Society. I finally made my way into the backrooms of the casino after fooling the staff into thinking I was a mechanic fixing a water leak, killed the chef who was going to cook Ted, and picked the lock of the freezer where Ted was being held hostage. Easy enough right? This is where everything went sideways for the next 90minutes as I tried to beat this mission and reloaded my save file dozens of times over. Ted would get stuck in combat mode preventing him from exiting the backrooms of the casino, thus preventing him from ever reuniting with his father and finishing the quest. Rooms of people would suddenly turn on me and start attacking without provocation killing me, my companions, and fucking Ted "The Turd" Gunderson. I found that the only solution is to leave the casino with Ted inside, fast travel to a different area, causing Ted to magically appear next to you and rush towards the New Vegas gate before the automated defense robots murder Ted because he is "not authorized" to enter the town. Once inside, you just walk back into the casino and the quest finishes. I hate Ted and his stupid ugly face. Had I known it was gonna be a big ol' cluster fuck, I would've killed him and left him to get freezer burn. This is considered a simple bug in all the glitches that can actually break your game or corrupt your save file.


﻿
﻿
Yet, I'm having a great time in Fallout and I'm totally surprised by how much fun Hardcore Mode actually is. It's scratching that itch for an expansive world and the gory joy of exploding the limbs off a murderous group of bandits, taking all their money, and buying water. After all, in the nuclear apocalypse, Hydration is everything.
Posted by NerdBomb at 6:04 PM

Warning: This podcast may contain swearing and/or drinking. In fact, we pretty much guarantee it does.